Norma Jennings received the Making IT Happen award at FETC 2016.
Norma had been the FSTE Region 1 president in the Panhandle area and served as FSTE president in 2011. Currently she is FSTE treasurer. 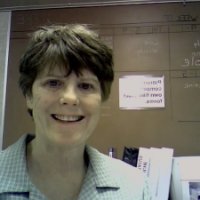 Norma recently retired from a long career with Escambia County Public Schools, where she started as a teacher of students with disabilities. She became an IT teacher and joined the district staff as Instructional Technology Teacher, where she helped many teachers become more proficient with integrating technology into instruction. She also was a Florida Master Digital Educator and in that capacity delivered many PD sessions around the state in the early 2000s.
Norma has a lot of grandchildren and toward the end of her career, she would try out various technology tools and products with them to get honest feedback about them, which added greatly to her professional development sessions.
Thanks for all your great service to FSTE and to the teachers of Florida who are interested in using technology, Norma!

TIME is wrong: Screens in schools are not a hoax → ← 2016 TERRA Grants for Florida Schools & Educators: Deadline 9/30